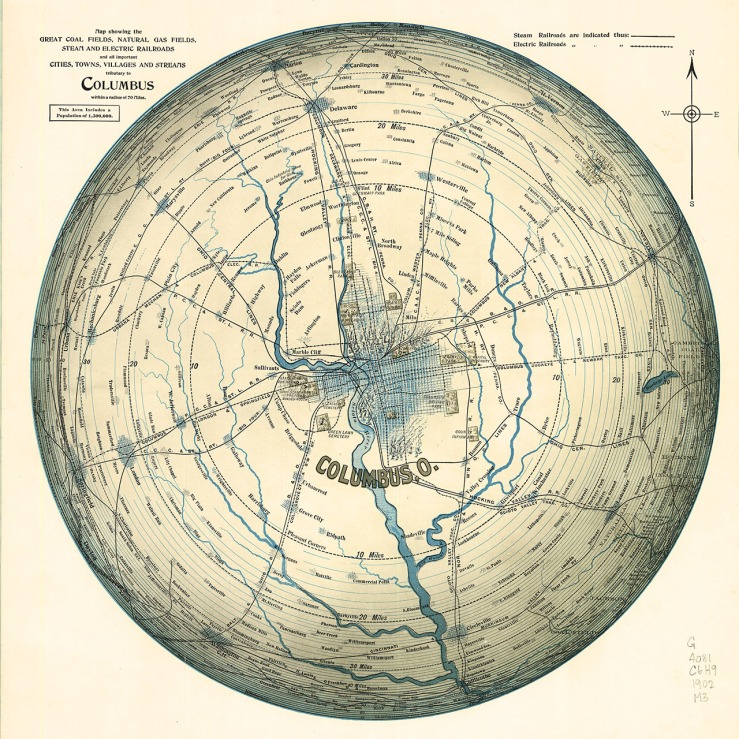 Azimuthal Projections is not a progressive rock album but ‘a map projection in which a region of the earth is projected on to a plane tangential to the surface, usually at a pole or the equator.’ I just came across (via Transit Maps) this azimuthal equidistant projection of Columbus, Ohio, USA which is catchily titled:  Historical Map: Map Showing the Great Coal Fields, Natural Gas Fields, Steam and Electric Railroads: and All Important Towns, Villages, and Streams Tributary to Columbus Within a Radius of 70 Miles. 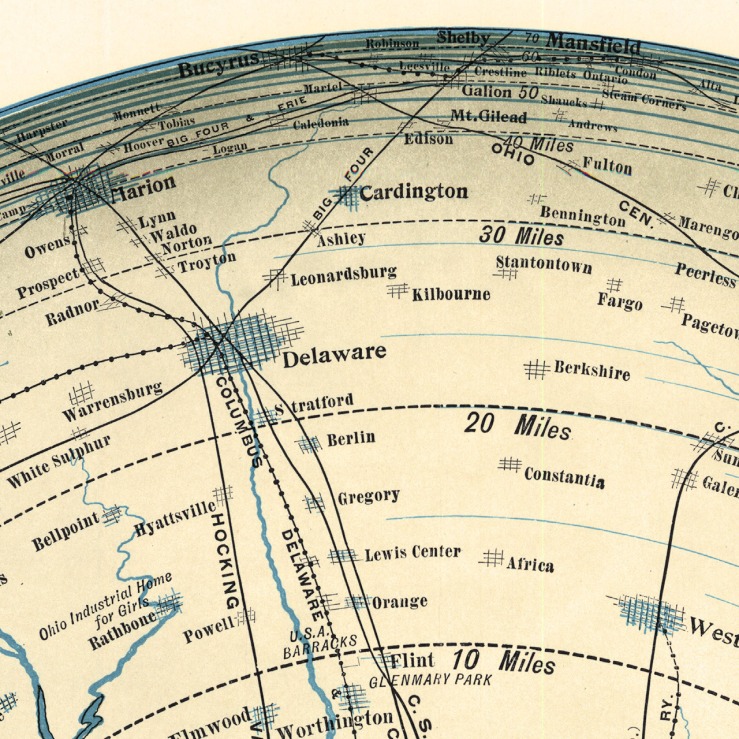 These type of maps are great tools for bioregional thinking and the aesthetics of this one are a big improvement of the Google Maps derived one I used in Dengie Diet. Some combination of this with the parish mapping encouraged by Common Ground would make for compelling bioregional communications tools.

‘Western cartography purports to be factual, conveying a true two dimensional picture of our four/five dimensional world. But, any lover of maps will tell you of the peculiarities and richnesses of charts of different Western cultures, different conventions, endearing or infuriating mistakes, the challenges of updating, and of necessary inaccuracies of representation (if motorways were really as wide as the map portrays…). And increasingly maps are made from satellite recording, ground knowledge is regarded as less precise, less useful, more costly. While we gather ever more facts about the planet, and share incredible amounts of research around the globe, at each extension of scale, detailed place-based knowledge gained over generations is lost, and wisdom mislaid. With each level of abstraction, we feel less able to argue what we know, and less sure in our valuing of the unquantifiable smallnesses which can make everyday life a delight and help nature and culture to interact benignly.’ – Graham Shackleton, ‘Places and People‘

The making of Parish Maps is a social activity of course – as Graham Shackelton’s essay title indicates it is about both places and people. Here I hit some of my own hang-ups, I don’t feel that skilled in or drawn to, the work of organising events and encouraging participation. I think I could be a good ally to such projects but I seem to have a block about being an initiator – probably because I’m an introvert.

The Localism Act 2011 made ‘Neighbourhood planning’ a community right and encouraged communities to shape development in their areas through the production of ‘Neighbourhood Development Plans’. Whether these plans will be effective as a tool of subsidiarity remains to be proven, but they seem to offer an opportunity to engage more creatively with places and people.  Frustratingly the work to complete an NDP of where we used to live, began just after we moved out and the NDP for where we live now was completed just before we moved in. The Burnham-on-Crouch Neighbourhood Development Plan is not bad as these things go but it’s a shame a more creative exercise didn’t happen in parallel to its creation.

Right now I’m reading David Holmgren’s new book Retrosuburbia; the downshifters guide to a resilient future which heavily promotes a more localized existence as part of a plan for energy descent. There’s not much about energy in the NDP (the word appears just 5 times) and a nod towards encouraging renewable energy is swamped by its couching within a determination to protect the character of the Conservation Area. Having moved from a 1970s property with insulated cavity walls and double glazing, where we had fitted a solar hot water system and solar photovoltaics – to an 1890s grade II listed timber framed cottage in a conservation area where I’m prohibited from fitting double glazing/solar HW/solar PV, etc. – the matter of ‘conservation’ has become a wicked problem.

In RetroSuburbia Holmgren writes about how planning regulations (a sector energy in permaculture zone/sector design) can be an obstacle to effective retrofitting, but he also sees these regulations as increasingly unenforceable in an energy descent future. I suspect that UK building listing regs will last longer than Australian residential/commercial zoning regs and the like – but I appreciate the pirate attitude.

We’re slowly fitting removable secondary glazing, installing heavy curtains, improving the roof insulation, we’ve already gone 100% LED lighting, AA/AAA rated appliances. We could probably make some insulative gains under the floor and in the walls – but the disruption doesn’t appeal right now. We’ve got a woodstove in the living room, but locally sourced wood is an issue as the area is so denuded of trees. We’re dependant on an old gas boiler for hot water and baseline space heating in winter. Parts for that boiler are getting harder to come by, so its years are numbered. A new gas boiler would almost certainly be more efficient (although with a shorter lifespan), but I’d like to get off fossil fuels early – so I’m not keen to persist with gas.

The UK has committed to decarbonizing space heating but that’s a wicked problem too (85% of the UK’s heating comes from natural gas). The currently suggested solutions seem to boil down to district heating systems, electric-powered heat pumps, biomethane or piped hydrogen distribution. The industrial players like piped hydrogen distribution as it fits into their centrally controlled model and is closest to business as usual – I can’t see it happening at scale though. Some combination of the other three with a massive insulation drive plus solar HW/PV might work across the UK. Despite being a mature technology, electric-powered heat pumps are probably a non-starter in our house at present due to listing regs and a building that was made to breathe. Biomethane could work with existing infrastructure – but it is in limited supply at present and is always going to being limited to a greater or lesser degree. District heating has got a long history in Scandinavia and in many ways is my preferred option, it works best in apartment blocks and institutional applications (universities/hospitals etc.) but could serve terraced housing (like ours) well but it needs infrastructure investment and a sustainable heat source – also, crucially, this solution requires collective action and there are currently no district heating plans in the area.

My vision for a future Burnham-on-Crouch/Dengie Bioregion includes district heating plants using anaerobic digesters fed by agricultural waste, new short-rotation coppice woodland and biogas produced in the sewage farm. We also need community control of new and pre-existing local wind and solar farms, exploration of small-scale tidal power in the estuaries and a local grid fed by all that and domestic/industrial/school rooftop PV. We need to ditch new nuclear at Bradwell in favour of equitable energy.