When it comes to catastrophic flooding in Essex 1953 tends to get all the coverage, but the inundation of 1897 was equally noteworthy – after breaches in the sea walls 30-35,000 acres of farmland were underwater. Eventually most of that land was re-claimed, but a stretch of the north bank of the Crouch, near North Fambridge, still reveals an area that was lost. Known locally as the horseshoes (not to be confused with the Three Horsehoes on Burnham Road) these artificial bays reflect the fall back defensive line that eventually became the de facto border between land and water when the original sea wall could not be rebuilt with the labour and resources available, The Google aerial view reveals something of the lost wall  and lines of wooden stakes are visible at low tide marking where it would have been. 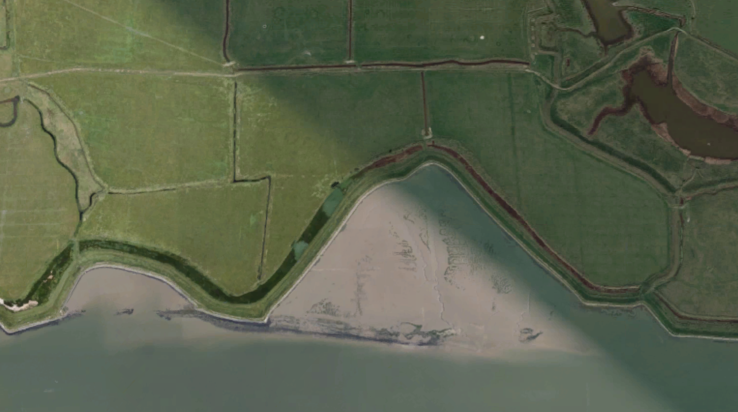 My recent walk between North Fambridge and BoC avoided walking the horseshoes by crossing Blue House Farm and joining the sea wall at the eastern extremity of the larger bay. 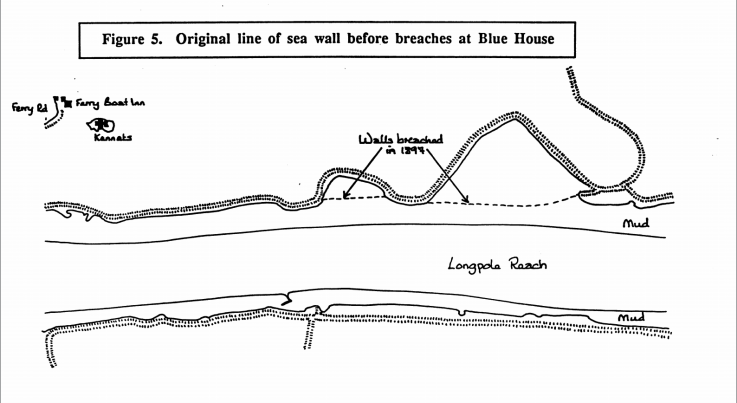 The Fambridge breach is discussed in F. Burd’s 1992 thesis Historical studies of sites of natural sea wall failures in Essex for the Institute of Estaurine and Coastal Studies at the University of Hull (published as English Nature Research Report, No. 15 by English Nature). Burd reports that the area was outside the responsibility of the Dengie Commissioners for Sewers and repairs to the breach were delayed by a disagreement between two farmers whose land was affected. The delay caused the breach to worsen over successive tides until the damage was beyond the means of either man to restore. Drawing on B.A. Board’s ‘The Fambridge Colony: an experiment in land reclamation by unemployed Londoners, 1906-7’ published in Transactions of the Essex Society for Archaeology and History, 18(3), (1987) she fills out what happened next:

Lord Rayleigh, who owned Blue House Farm, made several attempts to repair the wall with inset walls which were also breached eventually. Finally, the Working Colonies Committee of the Central (Unemployed) Body for London, together with Maldon Rural District Council, Essex County Council and local landowners produced a plan for repairing the wall using unemployed Londoners as the workforce. The work was implemented in 1906 and completed in 1907, although in March 1906 another high tide enlarged the breaches, until the larger breach reached a width of 700 feet.

Perhaps we might call the result poorly-managed retreat, some land was eventually returned to the realm of the river and to the wild but the mudflats don’t seem anywhere near as diverse as the partially-flooded mosaic of land in Blue House Farm’s current reserve.

In Burd’s book s/he looks at the dates in which major floods occurred in Essex and discerns that major floods of an ‘unprecedented’ level appear to occur on a roughly 55 year cycle – with each one being higher due to background sea-level rise but that the rate of sea-level rise has not increased in the period. That would not appear to be true in the post-1953 period, and one cannot help but dwell on the fact that more than 55 years have passed since 1953 and perhaps we are overdue a new ‘unprecedented’ flood.